August 24th is National Waffle Day! The Earliest types of waffles occurred in the Neolithic Age over four thousand years ago. It started in Belgian, with cereal pulps baked into cakes. Around the first century, today's waffles came into being in the form of a flat hot cake made by putting two large irons together. The first waffles were not as sweet as the ones we have today, as this was long before the invention of syrup and many other condiments. It wasn't until around the 17th century that waffles had sweet flavors, though there was a difference in the kind of waffle one could purchase depending on their class. The rich could get much more delicious waffles than the poor.

If you make them right, they can be a healthy breakfast, if they come from whole wheat and grain. Whole grains also make the waffle more robust and less prone to caving in, making them useful for putting on fresh fruit toppings, which further the healthiness. Little Red Kitchen Store has some great items for making your next waffle masterpiece, including waffles makers and toasters from Cuisinart.

For a touch of flavor, come by Little Red Hen Kitchen Store and add some Maple or Blueberry Syrup from Stonewall Kitchen. So this August 24th, ring in on National Waffle Day with the help of Little Red Hen!

Waffle Day started as a result of the first United States Patent for a waffle iron to Cornelius Swarthout of Troy, New York on August 24, 1869. In honor of this anniversary, National Waffle Day is observed each year on August 24th. 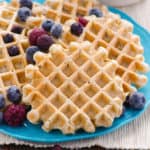 Store: Refrigerate in an air circulating container for up to a week.

Freeze: Fully cook, cool completely, and freeze in an airtight container for up to 6 months. Reheat in a toaster.